skip to main | skip to sidebar

On the Power of Trolls: A Response to Kotecki

James Kotecki recently released a video commenting on the Rebuild the Party website which was the subject of a previous post on this blog (which, as I expected, seems to have had precisely no impact on anything). The video:

I wanted to point out a slight error in this show which is entirely not Kotecki's fault, but which could have made the show much funnier if he had known about it. The problem is this: Kotecki anticipated that because the Rebuild the Party site was both politically oriented and on the internet, it would come to be dominated by libertarians. And that was not a bad prediction. But he of all people should have known that on the internet, there is one group that is far more powerful, and far more dastardly, than the libertarians. That group, of course, being the trolls.

See, unbeknownst to Kotecki, the "Reach out to Ron Paul and the Campaign for Freedom" idea was not actually the most popular idea on Rebuild the Party, though it might appear as such to the casual observer. Because I'm a super secret Republican Party insider (that is, because I submitted an idea on the site, and automatically got put on some kind of mailing list without noticing), I received an e-mail from Rebuild the Party which listed the most popular ideas on the site in order of votes received:

It appears that the most popular idea on the site was actually member Hotlaska's "Truck Nutz for all!" The idea, which has since been marked as "inappropriate" and therefore no longer appears on the main site, simply advocates that the Republican Party chairman should "Give all Red Blooded Americans a pair of Truck Nuts for their F150's!" Though apparently the idea has lost some votes since I received my e-mail, it is still vastly outpacing the Ron Paul idea for the lead on the site. 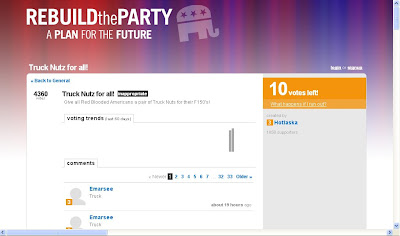 Not only is the comments section of this idea a paradigm cooler-of-Haterade-on-the-coach masterpiece, but the subject of the idea, Truck Nutz, is perhaps the funniest product in existence:

So I hereby applaud Hotlaska for a fantastic episode in troll history, and nominate him/her for Haterade Hater of the Week. And Kotecki, I expect a correction.

Thanks are due to the anonymous commenter who alerted me to the source of this brilliant phenomenon. Props go to Sara K. Smith, Jim Newell, and the rest of the Wonkette hate legion. Bravo!
Posted by Danny at 3:01 PM

You have done well to expose the Republican censorship of the most important and pressing demand of their constituents.

As your reward, I show you just how far the rabbit hole goes:

"Rational philosophy is on the march. It will f--- up all of your sh-- and leave you without any teeth."

Welcome to Back to the Drawing Board! Until the summer of 2009, this blog was maintained by Danny Shahar, who subsequently went off to begin graduate school at the University of Arizona. Feel free to look around, keeping in mind that by the time you read this Danny will likely think that everything on this site is terribly unsophisticated and crude.